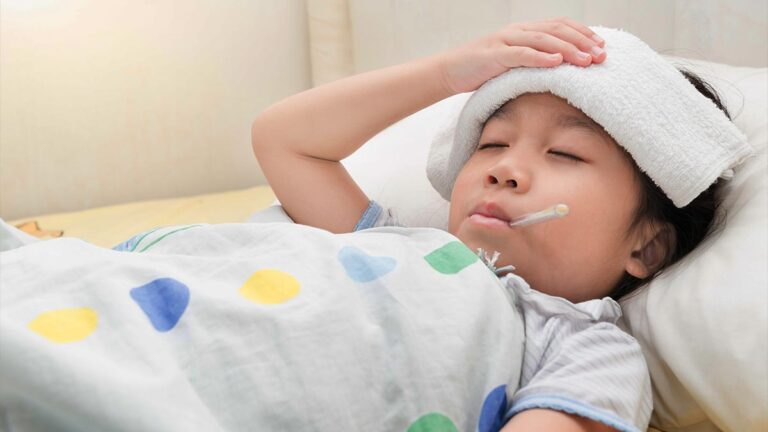 One of the causes of infections in childhood is the immaturity of the immune system. Infectious diseases habitually and inevitably accompany children during most of their childhood due to the immaturity of their immune system, which is more sensitive to infectious agents, and also due to unhygienic habits, such as sharing pacifiers or toys that they have previously been taken to the mouth and that make it easier for these infections to spread more quickly.

Cause of the infections:

Viruses cause most infectious diseases that affect children. It means that they do not require antibiotics for their resolution but only measures to help the child overcome the process and its symptoms in the most comfortable way possible.

Yes, sometimes children can also suffer from bacterial infections; In these cases, a doctor will always recommend antibiotic treatment.

It is essential to know that some infections can be transmitted before symptoms even appear, in the incubation period, making it even more challenging to control their spread.

There are four fundamental forms of contagion:

Faeces eliminate transmission through bacteria or viruses. The contagion occurs by ingesting them, for example, through contaminated water or food, by direct contact: from child to child or through objects that are shared By contact with organic liquids: such as blood or saliva.

The most frequent infections:

Among the most frequent infections due to their form and time of contagion are the following:

It begins as a catarrhal picture, followed by progressive respiratory distress with increased work breathing.

Viruses cause them. The respiratory route and contact through contaminated hands and objects are transmitted through high contagiousness.

Treatment: nasal lavages and aspiration of secretions are recommended, as keeping the baby in a semi-recumbent position, taking divided feedings and maintaining adequate hydration. Occasionally, hospital admission for oxygen therapy may be required.

Conjunctivitis is inflammation of the conjunctiva, the tissue that covers the eye’s white part. It can be caused by:

Virus: is associated with colds. Its contagious period is at least nine days since viral particles can remain on pillows and towels for weeks.

Bacteria: more infrequent, although it is also quickly spread.

There is no clear consensus, but in the case of being caused by a virus, you should stay at home due to its high contagiousness, and if the conjunctivitis is bacterial, you should not go to school during the first 24 hours of treatment.

Hand-foot-mouth disease:  benign pathology that causes small blisters on the palms of the hands, the sole and the inside of the mouth, and fever.

Contagious period: highly variable since it can start before symptoms appear and last several weeks.

The patient cannot go to school until the fever is gone and the blisters on the skin have dried.

Treatment: there is no treatment against the viruses that cause it.

Pharyngotonsillitis: infection of the tonsils or tonsils. It can be caused by:

Bacteria: produces a higher fever, marked malaise and swollen glands in the neck.

Contagious period: in any case, maximum in the acute phase in untreated patients and ceases 24 hours after starting treatment

It is recommended not to go to school until 24 hours after antibiotic treatment. If the origin is a virus, they can continue going to school, except if there is a fever or general malaise.

Treatment: antibiotics prescribed by the doctor for bacterial infection and rest and hydration if it is viral tonsillitis.

Acute gastroenteritis:  inflammation of the mucosa lining the stomach.

It can be caused by viruses (rotavirus) or bacteria and, in both cases, causes diarrhoea, vomiting and abdominal pain.

Transmission: faecal-oral contagion by water, food or contaminated objects. Also, from person to person when sneezing or spitting. It is a disease that spreads very quickly.

Very variable incubation and contagion period, depending on the causative germ.

The recommendation is school exclusion until 24-48 hours without symptoms.

Treatment: fasting or an astringent diet is unnecessary, but a lot of hydration and rest.

Transmission of the virus by the respiratory route in a radius of up to 2 meters. It can also be spread by direct contact with recently contaminated objects. The hands are a frequent vehicle of contagion.

Infectious period: from 24 hours before symptoms to the fifth or seventh day of illness.

It is recommended not to go to school until the resolution of the disease.

Pinworms (pinworms): infection by a parasite that causes itching around the anus, restless sleep and waking up at night.

Transmission by faecal-oral infection or through contaminated objects, such as clothing or sheets.

Contagious period: while the parasites remain in the body.

School exclusion is not recommended, but treatment for the patient and relatives who have lived with him is.

Treatment: the specialist doctor will prescribe the taking of an antiparasitic drug.

Molluscs (Molluscum contagiosum): a viral infection that manifests with small lesions or bumps on the skin, grouped and throughout the body.

Transmission by direct skin-to-skin contact and by contaminated objects.

Contagious period: while the lesions last.

It is not a cause for school exclusion, but it is recommended to avoid direct contact with the lesions and not to share toiletries, clothing, etc.

Treatment: Topical solutions destroy the molluscum chemically, but they must be prescribed by a medical professional.

Transmission is mostly through saliva, mainly, and also through respiratory secretions and contaminated objects.

The long incubation period is between 30-50 days.

Contagious period: up to 2 months.

It is not a cause for school exclusion because it does not require the patient to remain isolated.

Whooping cough: a bacterial infection that causes mild fever and diarrhoea, especially a strong cough, which can lead to vomiting or suffocation episodes.

Contagious period: maximum during the first two weeks of cough.

It is recommended not to go to school until five days after starting treatment.

Chickenpox: an infection caused by the varicella-zoster virus that is characterised by the appearance of pink pimples on the skin that causes intense itching.

Contagious period: from 4 days before the rash to 5 days after.

It is recommended not to go to school until all the lesions are in the form of a scab.

The Top 5 Health Benefits Of Being A Kiwi

How Fiber Gummies Can Be Effective in Relieving Constipation?

One of the causes of infections in childhood is the immaturity of the immune system.…